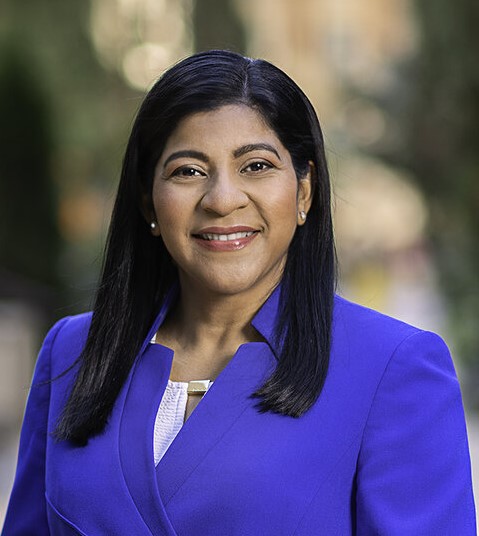 Evelyn Cortez Diaz is the highest ranking Latina for the Los Angeles Department of Water and Power(LADWP) and also the first Latina and second woman to be appointed Director of Water Engineering and Technical Services. Sot only has she made significant contributions to LADWP but also UCLA. Cortez is a UCLA CEED alum that has continued to participate in CEED’s professional development events over the years. She has also been a guest Industry Speaker many times in ENGR 87 with the Freshman Class. She obtained her degree in Civil Engineering in 1992.

Cortez immigrated to the US from El Salvador when she was 12 years old and had to become fluent in the English language. She was placed in remedial classes in order to catch her up to speed, but that did not discourage her because she wanted to help the world be a better place. She aspired to protect the environment, so she decided to focus her studies on water resources and environmental engineering. After struggling with language and math classes, she graduated high school as 10th in her class with a 4.3 GPA. Cortez put all her eggs in one basket and only applied to UCLA. Cortez and her family were scared of the risk it had as she was undocumented at the time, but she decided that her education was a risk worth taking. She was accepted and kept her secret. She worked two jobs every quarter in addition to her rigorous course load.

With the passage of the Immigration Reform and Control Act of 1986, Cortez-Davis and her family were able to begin the amnesty application process to gain permanent residency just as Cortez-Davis was starting her freshman year at UCLA and until her third year she became a legal resident.

Cortez-Davis was involved with SOLES, UCLA SHPE Chapter, and was able to connect with many peers. She was also a founding member of its K-12 outreach program in the early 1990s, arranging visits to local schools to provide math and science tutoring and organizing STEM events for students in underserved communities in LA. She was also a part of ASCE (American Society of Civil Engineers) in their concrete canoe competition. After spending 5 years at UCLA, she graduated in 1992 and was a Student Commencement Speaker.

She has been a civil engineer for more than 25 years gaining experience from the water industry, water conservation, water quality, pipeline design and construction, environmental compliance, recycled water, water rights, groundwater remediation, and groundwater planning. She currently leads a team to safely reat, store, and transport water for the 4 million people in the City of Los Angeles. At LADWP, Cortez-Davis helped launch the Society of Women Engineers (SWE) and SHPE chapters to support its employees and influence the next generation of engineers and STEM professionals. In 2005 she also published her book, “December Sky: Beyond My Undocumented Life,” which chronicles her family’s immigration story, including her fear of living as an undocumented student and her journey to U.S. citizenship. She said she hopes her experience can help those in despair to find courage.